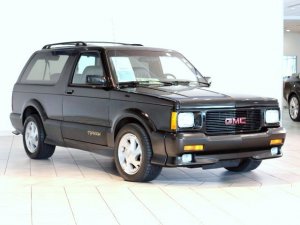 The GMC Syclone and GMC Typhoon were performance variants significantly ahead of their time. They feature a turbocharged 4.3 liter V6, similar to that found in the Buick Grand National (3.8). The Typhoon’s AWD lets it hit 60 in 5.3 seconds. Styling is great, it is a boxy  mini truck with a low, aggressive stance. The interior is from the 80’s, even though they didn’t start making Typhoons until the early 90’s. Low production figures and moderate collectability will make a well cared for Typhoon an investment, rather than a liability.