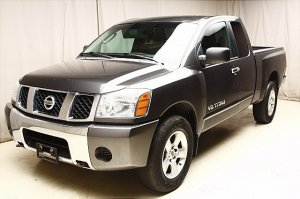 The Titan is Nissan’s only full size truck to date. It only offers extended cab and crew cab configurations and the 317 horsepower 5.6 liter V8. Performance for the Titan is pretty good, but the styling can be viewed as somewhat aging. The towing capacity tops out at 9,500lbs for the Titan.

What to consider when buying:

Catalytic Converters can go bad every 40-50k miles on some Titans. Expect to spend near $1000 for each replacement.