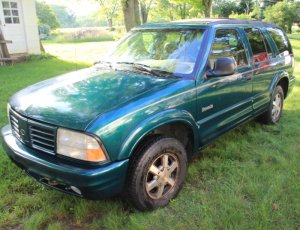 The 2nd Generation Oldsmobile Bravada is sibling to the 2nd Generation Chevy Blazer, sharing nearly every component. Expect decent performance from the 190hp 4.3L V6 and adequate fuel economy. This generation Bravada is fairly reliable, but always check to see how the previous owner cared for it. The quality of the paint, bumps/dings and interior wear are all good measures to see how previous owners have cared for their Bravada. Aside from that, common things to watch for on Bravadas include:

Fuel pump. Listen for a whirring when the key is in the “acc/on” position. This is commonly a sign of a fuel pump on its way out. Only use the OEM fuel pump, the aftermarket brands will fail very quickly. Expect replacement costs and labor to the tune of $1200.

4×4 System. Vacuum lines tend to dry up, leading to failure of the push button 4wd system. While a simple fix, troubleshooting can be expensive.

Transmission. The 4 speed automatic transmission has been known to fail at 100-120k miles. Repair/replacement is typically in the $2000-2500 range.

Sagging doors. The door bushings wear out, leading to difficulty closing the front doors. This is more of a nuisance that can be tolerated, but a $10 part and 1-2 hours of labor typically solves this issue.